Kerry Wisner has been involved in the study and practice of the Magical Arts for much of his life. He was first introduced to the Art by his father who was keenly interested in metaphysics and the occult, and was himself a member of an esoteric order. Kerry studied astrology through Sybil Leek’s school in the 1970’s, and it was through correspondence with Ms. Leek that he was led to Julie, a woman who practiced a form of traditional Witchcraft which she called “The Willow Path”, a tradition with roots reaching to the Basque region of Europe. Kerry trained with Julie until her death. The book “The Willow Path” represents the first public presentation of many of Julie’s teachings.   As such, this is a testament to a unique form of the Art that, to our knowledge, has not been seen in print before.

In the years that followed Kerry went on to train in various forms of Western Magical Arts, including being initiated into a Hermetic Order.  Kerry has extensively researched the magical techniques of Ancient Egypt drawing from accredited academic works as his source material. He has had a number of articles published and is the author of several books, including; “The Eye of the Sun: The Sacred Legacy of Ancient Egypt”, “Song of Hathor:  Ancient Egyptian Ritual for Today” and “Pillar of Ra:  Ancient Egyptian Festivals for Today.”  He is also a certified Hypnotherapist and Forensic Investigative Hypnotist. It was in this capacity that he and his wife investigated and wrote the book “Reveal Nothing:  A Forensic Investigation of a UFO Abduction.”

The book “The Willow Path” is the first of a forth coming trilogy “The Geassa”, which presents a codification of his training and practice of the Art, focusing on Traditional Witchcraft.  Kerry lives in the forests of Western New Hampshire USA with his wife where he continues to write and is available for speaking engagements and classes.

Kerry Wisner talks about: The Willow Path – Witchcraft, Hermetics & The Hidden Wisdom of the Magical Arts 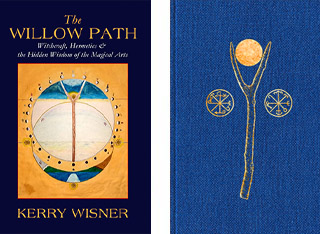 Witchcraft, Hermetics
&
The Hidden Wisdom of the Magical Arts